Due to a high volume of orders, there may be additional delays in processing your order. You will be notified via phone or email within 2 business days. 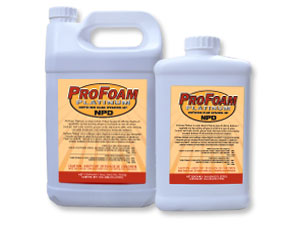 Remember the countless times you almost hit the target when treating for pests--ants, drain flies, spiders, but once sprayed, the liquid ran in the other direction, or couldn't reach the nest because the equipment simply couldn't carry the product into the target zone?

ProFoam is a thick non-ionic, substantial foam that plays well with all insecticides, biocides and even some fertilizers. ProFoam stacks up like nothing else, travelling immediately into cracks, crevices, under concrete slabs, wall voids, vertical and horizontal surfaces-- all places that are known harbourages for pests. When mixed according to the directions on the label and on the insecticide label, ProFoam gets to the target where liquid treatments can not go.


The Science Behind the Label


ProFoam Platinum is a non-toxic blend of surfactants and adjavants. Use it to complete “Green Treatments” in conjunction with NPD’s other “Green” products; BIOPlus and Vital Oxide and increase their reach and effectiveness.


ProFoam Platinum has not been formulated using any compounds listed in the current California Prop 65 Bill.


ProFoam Platinum, an industry standard has been independently tested by major chemical manufactures and was found to “play well with others” as it is compatible and non-repellent. Foam is listed on their labels as a recommended treatment procedure.